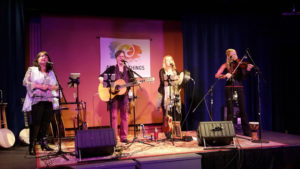 Jon Pappalardo was in the audience at our recent show and wrote a wonderful review of our performance. It’s so nice to hear praise and kind words for our efforts. Thanks Jon!

“I’ve been a fan of Beaudette’s music for a few years now but I’d yet to see her live until this April 23 concert. I had a feeling the show would be special; her latest album South Branch Road is exquisite, but I didn’t know how far it would exceed my expectations.”

“The cultural immersion kicked into high gear when The Kelly Girls took the stage in the second half. The four-piece Celtic band, of which Beaudette is a part along with Christine Hatch, Aisling Keating and Theresa Gerene, performed songs that traversed centuries, generations and even ancestry.

Their set was richly layered with historical significance and a captivating approachability. They opened strong, with their tight harmonies giving way to infectious fiddle-drenched instrumentation.”

“I came away having witnessed a unique bond between friends making music simply out of passion for the art. The Kelly Girls, the epitome of a tightly in synch ensemble, left me in the best possible place – wanting more and more. If you ever get a chance to see them live, hopefully accompanied with a Beaudette solo set, I’m sure you’ll come away feeling exactly as I did that evening. Make it a point to seek out a performance; I know for sure you won’t regret it.”