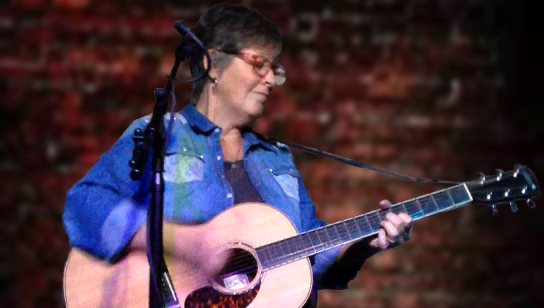 A rich pallet of folk and singer/songwriter with a hint of country and a dash of Celtic music – all the ingredients of a Canadian Kitchen Party!

Blending brave and honest songwriting, first-rate musicianship, and a huge helping of native Canadian wit, Nancy Beaudette is an artist of songs and heart. She was raised near Cornwall, Ontario, a place sustained by farming and millwork where French and English languages were friendly neighbours. Her songwriting delves into those roots, weaving a nostalgic past into lush songs of familial history, good-humored folly and poignant observations of life and loss.

As a budding 11-year-old musician, she cut her teeth chording along to her grandfather’s old-time fiddling and devoured other influences as fast as she could find them: show tunes and pop songs and everything in the Reader’s Digest Songbooks. Clarinet and saxophone made their entrance in her adolescence where Nancy excelled in her position as first chair in the high school band, and in community theatre orchestras.

Singing and playing in a church choir also exerted a powerful influence over Beaudette’s early musical career. During the 80’s and 90’s, she directed a twenty-five voice choir, wrote her own liturgical music, and toured all over Canada and the northeast US. Her recordings garnered radio play and high praise from all quarters, including a CGMA (Canadian Gospel Music Association) Song of the Year Award in 1997 for “Create in Me”, and a CGMA nomination for Album of the Year for “Surrender”.

Nancy has eight full length CDs to her credit, and has acquired numerous accolades throughout the years. In 1997, she won a CGMA for Song of the Year (Canadian Gospel Music Award – highest honor for gospel music in Canada), and has been a Winner or Finalist in some of the industries most distinguished competitions, including The Kerrville New Folk Songwriting Competition, Mountain Stage New Song Competition, Mid-Atlantic Song Contest, Great American Song Contest, and the Independent Music Awards, and Global Peace Song Awards!

The author of two books, “SongC.R.A.F.T – Writing Songs in Your Authentic Voice,” and “Musings – 28 Days of Collage,” Nancy is passionate about all things creative. Both books invite readers to join in the creative process for self-healing and discovery.

For fans and listeners, it will come as no surprise to learn that this award-winning Canadian singer-songwriter also happens to be an award-winning sign-maker. The artistry that has brought success to her company, Sign-It Signs & Design, imbues every aspect of her singing, songwriting, and recording. Making signs and writing songs have much in common. Both begin with a creative inkling, both require a combination of love, faith, and craft, that lead us to see the world in new ways. Indubitably, accolades for Nancy’s work continue to abound.

On-stage and off, Nancy practices hometown hospitality, taking special pleasure in “greeting you at the door.” Come to one of Beaudette’s shows and you will experience first-hand all the warmth and welcome of a Canadian kitchen party!

“I try to get a sense as to whether or not the song and performance touches the heart of the listener. Some people can do that, other people cannot. So, when I say Nancy has something very “special,” I mean it and would love to have talent managers, publishers and promoters take notice.” – Tom Thorpe, Thorpe Entertainment Enterprises

“Nancy Beaudette is ebullient and optimistic and clearly enlivened by her future with music. Her smile is evident even through the phone lines!” – Rich Lopez, Dallas Voice

“It’s rare to find someone with the level of depth and sensitivity in their songwriting…Nancy stands out above the crowd!” – Barbara Cloyd, Bluebird Cafe, Nashville, TN

Few countries possess a folk music as rich and culturally varied as Canada’s. It is a society originally influenced by the Aboriginal peoples, and the French and British settlers in the 16th and 17th centuries. Today Canada is a culturally diverse society as rich and varied as the vast landscape it calls home.

The consummate hometown girl, Nancy Beaudette is deeply proud of her roots in Cornwall, Ontario, a place sustained by farming and millwork where French and English languages were friendly neighbours. Here on the border of Glengarry County, she was fed on French fiddle-music and Irish and Scottish reels.  And as a budding musician who fell head over heels with her first guitar at age 11, she devoured other influences as fast as she could find them:  show tunes and pop songs and everything in the Reader’s Digest Songbooks.  She cut her teeth chording to her grandfather’s old-time fiddle-playing, playing clarinet and saxophone in swing and show bands, and singing in her church choir.

Today Nancy works as a traveling mistral, extolling the well-kept secrets of her native land. With guitar in hand, she’ll have everyone in the room singing both original and traditional songs of life in the Great White North! Come to one of Beaudette’s shows and you will experience first-hand all the warmth and welcome of a Canadian kitchen party!

Nancy is available for Library, School or Church Programs, and welcomes your inquiries.