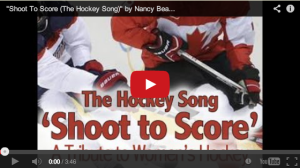 A Tribute To Women’s Hockey

There’s going to be a very big hockey game at the Olympics – again!! The Canadian Women vs the USA Women – the two BEST teams in the WORLD – will face off for the gold medal.

The sport has come a long way since I was a kid, thank goodness for that! I grew up in rural Ontario, and the winter months brought ice, snow and hockey! Home made rinks and ponds were cleared and kids from the whole neighbourhood showed up to play, girls and boys alike. Back in the 60’s there were no leagues for girls, but the decades following changed all that. In the late 70’s I decided to try out for a college team, thinking it would be much like the pond hockey games I played as a kid. Imagine my surprise when I showed up at the rink and all the girls were decked in full hockey gear from head to toe. I was completely unprepared and somewhat humiliated, but all these years later, the experience became the inspiration for this song!

“Shoot to Score” is a tribute to women’s hockey, and honours Lori Dupuis from my hometown of Cornwall, Ontario Canada. She played on the Women’s Olympic Hockey Team in Nagano and Salt Lake City, capturing silver and gold metals. You’ll also recognize other hockey legends named with Lori, but you’ll have to watch the whole video to find out who made the roster.

I dedicate this song to ALL women/girl hockey players! SHOOT TO SCORE!!!!
Nancy