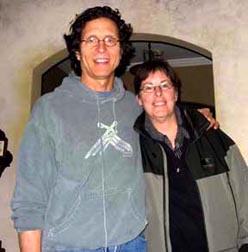 Mark April 18th, 2013 on your calendars and ‘get ye down to ye ol’ Bull Run‘ in Shirley Massachusetts for a special show featuring Nashville Songwriter and Grammy winner Jon Vezner – and a guest appearance by Nancy. “Jon’s a really sensitive writer and a witty guy. I love his songs, the sad ones and the humorous ones. He’s got a pretty dry funny bone!” says Nancy. Back in 2008, the pair penned a poignant ballad called “It Finally Took Losing You” at Vezner’s studio in Nashville, but this is the first time they will share a stage.

The Bull Run is a 300-year old tavern that oozes charm and casual elegance. It was originally a stagecoach stop where tired and thirsty travellers could stop, rest, and relax with their boots off if they wished to. The Tavern now plays host to a prestigious concert series which attracts national touring acts.

The night before the concert, Nancy’s label “Moonlit Pond Records” will host a songwriting workshop with Jon at the helm. The local songwriting community are invited to come and present one of their songs to Jon for feedback. The workshop is Wednesday, April 17th from 7:30 to 10:30 in Lunenburg, MA. The cost is $20 per person, or $15 if you buy a ticket to the concert on the 18th.

Get your tickets for the Bull Run show now: Click Here for Tickets.

Reserve a seat at the Songwriting Workshop – email Nancy