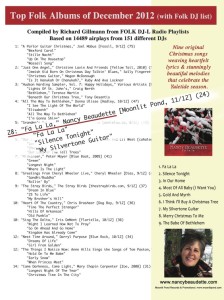 FOLKDJ-L is an electronic discussion group for DJs and other people interested in all folk-based music (bluegrass, old-time, traditional balladry, traditional international music, singer-songwriters, etc.) on the radio. With over nine hundred subscribers from all corners of the earth, they are a lively bunch with a unique perspective on folk music.