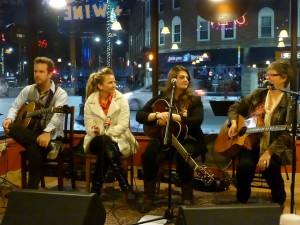 Nancy Beaudette hosted the latest New England to Nashville (NETN) Writers Night. Joining her in the round was Jilly Martin (accompanied by Mike Kelly), and Britt Hill. This well attended event also featured numerous members performing in the open mic portion of the program.

NETN is a group of over 200 songwriters and artists based throughout New England who are focused on the Nashville music scene. Creator Matt Casey was inspired to start a Facebook Group  in 2012 after becoming aware of so many songwriters making the trek to Nashville on a regular basis to further their careers. In an effort to support these endeavours, workshops and performances now happen throughout the region, giving both artists and songwriters an opportunity to network and collaborate at home.

This is the second NETN event that Nancy has hosted, and there will be more involvement in the coming months. If you have questions about the group, feel free to contact Nancy at contact @ nancybeaudette.com (remove spaces before and after the @ sign) 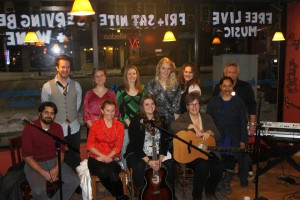