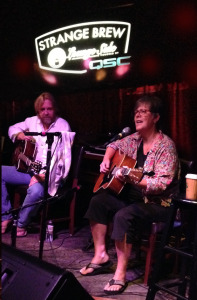 The South West Regional Folk Alliance conference (SWRFA) was held in Austin from September 24th to 28th. It was the merging of musical talent from all over the United States, and a handful of Canadians – Nancy being one of them. Showcasing new songs, networking with industry folks, and bonding with like-minded artists were highlights. Nancy also presented a workshop during the conference on “Mapping A Five Year Plan” – a tool she uses for her own career, and one that she teaches to her coaching clients as well.

New cohorts Bernice Lewis and KJ Reimensnyder-Wagner joined forces with Nancy to take on the SWRFA songwriting challenge. Participants pull a prompt from a jar, write the song, and present it at Sunday’s brunch. “Community Gardening” topic inspired the song title, “You need a big pile of Sh*t”! It was received with the much anticipated laughter by the audience!

Mingling, listening and late hours of performance are the norm at conferences like this. Brenda Freed, Ken Gaines, Beth Lee and Anny Celis are just some of the great folks Nancy rubbed elbows with this week.

The fun continued even after the conference ended! As a special treat, Nancy performed at “Strange Brew” in Austin – one of the cities premier listening rooms. Her new friend George Ensle invited her up to play a song during his Sunday afternoon performance.

Hanging out with Nashville’s Jim Photoglo was another highlight. Not only is Jim a hit writer, he played in Dan Fogelberg’s band, and with Carole King! Yes, really!

As a result of SWRFA, Nancy will be back to tour TEXAS in April 2015! Watch for details here on the website or sign up to receive News updates.